Our credentials are second to none: many of our attorneys served as former Assistant United States Attorneys, we have been repeatedly recognized by rating publications as preeminent in white collar criminal defense, and we hold leadership positions in the most prominent white collar bar association groups. Our experience includes a growing number of Foreign Corrupt Practices Act matters. We represent global corporate executives and corporations, including government contractors, from the earliest stage of government inquiry to non-prosecution agreements, settlements and trial. We also advise clients on FCPA compliance programs to mitigate threatened penalties and future prosecutions. Bird Marella has a deep history defending clients in criminal tax investigations and trials. Our attorneys tried the largest federal tax case in the District of Hawaii, and represented an international corporation and its chief executive officer in what was then the largest federal criminal tax case in the nation.

We have successfully defended clients in cutting-edge prosecutions of some of the first online gaming websites, online pharmacies, subprime mortgage lending, and numerous bank and securities fraud actions.

When it serves our clients’ interests, we serve to mitigate clients’ exposure through discreet and productive negotiations with government agencies. When clients’ interests are best served by trial, Bird Marella’s reputation as top-tier civil and criminal trial attorneys proves advantageous for clients in federal and state courts.

Convinced Government to Not Charge Bank President with Mortgage Fraud: We represented the former president of a bank considered by the media to be a “poster child” for the national mortgage crisis. Our client was investigated for mortgage and securities fraud and we resolved the matter, including the grand jury investigation, achieving no liability for client.

Averted Jail for Insurance Executive in False Statements Case: We defended the chief executive officer of a consortium of insurance companies led by an international financial institution alleged to have aided and abetted false statements to the U.S. government. We were able to negotiate a settlement with a fine and probation.

Persuaded Government to Forgo Criminal Fraud Charges Against Hotel Chief: In our defense of a hotel executive launching a new luxury division in competition with his former employer, we represented the executive in a federal grand jury investigation and in civil lawsuits alleging trade secret, mail, wire, and computer fraud violations. We convinced the government not to pursue criminal charges and negotiated a civil settlement resolving the matter.

Defending Garment Company Owner Accused of Defrauding The Workers Compensation System: We are defending the CEO and owner of a prominent garment industry company charged with workers’ compensation fraud.

Obtained Civil Fraud Settlement, Criminal Defense Proceeds for Tech CFO: In our defense of the former CFO of a technology company, we achieved a settlement of civil fraud charges related to revenue recognition and options. Our representation continues in the U.S. District Court for the Southern District of New York on criminal charges of securities fraud, falsifying corporate records, and conspiracy.

Resolved Parallel Criminal-Civil Charges for Medical Researcher: A senior scientist at a major pharmaceutical company faced parallel civil and criminal actions involving alleged violations of the federal Computer Fraud and Abuse Act and the Economic Espionage Act. In our representation of him, we obtained a “no charge” decision in the criminal investigation and the civil action settled on favorable terms.

Represented Defendant in Equipment Leasing Fraud Claims: We defended a vendor accused of fraud in connection with equipment leasing agreements. We achieved a favorable outcome that allowed our client to be treated better than all of the remaining targets of the investigation.

Obtained Jury Acquittal of Bank Fraud Claims Against Businessman: We obtained a jury acquittal on all counts of substantive bank fraud for a prominent businessman.

Settled $100 Million Fraud Claims for Telemarketer: The firm represented a telemarketer in a purported $100 million fraud prosecution and favorably resolved his case.

Reversed Government Decision to Charge Accountant with Bank Fraud: We represented an accountant in a bank fraud investigation relating to the purchase of commercial real estate. We persuaded the government to reverse course and decline to bring charges.

Persuaded Government Not to Charge Business Client with Bank Fraud: In our representation of a businessman in a fraud case concerning the accuracy of disclosures relating to a bank, we offered a detailed oral presentation which led the government to decline to bring charges.

Achieved a Non-Prosecution Agreement in Export Crime Case: The firm defended a large public company, a defense contractor under investigation in Southern California, for export crimes. After the Assistant U.S. Attorney announced his intention to indict, we persuaded the AUSA’s supervisors to overrule this decision and entered into a Non-Prosecution Agreement with zero penalty, believed to be the first of its kind in this area.

Avoided Criminal Indictment, Settled Government Contractors’ Fraud Allegations: We defended an Illinois-based defense contractor and its two owners against federal allegations that they overcharged the government in a series of military contracts extending over a decade. We avoided indictment of the owners in the criminal case and achieved a global monetary settlement for the company of about ten cents on the alleged dollar.

Settled SEC Accounting Fraud Charges for Online Company CFO: We represented the CFO of an online real estate company accused of accounting improprieties that inflated the company’s online advertising revenues. We constructed a non-incarceration settlement with the SEC that included no admission or denial of allegations.

Achieved Dismissal of Tax Evasion Claims for Religious Charities: We defended an insular religious community in a tax, money laundering, and money remitting prosecution that shook the community. After winning a motion to suppress a search, we settled on the eve of trial with the dismissal of all counts against four of the five organizations, and a mutually acceptable fine against the fifth.

Mounted Trial Defense for Digital CEO for Tax Evasion and Investment Fraud: We represented, in a DOJ federal trial in the Northern District of California, the founder of a digital entertainment company prosecuted for investment fraud, and money laundering tax evasion related to his sale of founders shares. The allegations resulted from investigations by the FBI and IRS criminal division. We were able to secure a release on bond for the defendant prior to trial when previous counsel could not.

Achieved Dismissal of Money Laundering Charges After Hung Jury Trial: In our defense of the West Coast branch of a company specializing in the international transportation of valuables and accused of money laundering, the trial ended in a 10-2 hung jury, leaning toward acquittal. Previously, another defendant had been convicted in a trial in New York. Rather than retry the matter, the government dismissed all charges.

Settled Record Setting Tax Case for Multinational CEO: We defended a multinational company and its CEO in the largest federal criminal tax case in the history of the Central District of California. After the case was charged, we battled the government for two years. In the end, we won a highly favorable settlement for our client.

Reversed Government Decision to Charge Business Leader with Tax Crime: In our defense of a successful businessman in a massive federal tax investigation, we presented several detailed presentations that persuaded the government to reverse its decision and decline to file charges.

Achieved Declination of Charges for Attorney in Offshore Tax Deal: We have represented several attorneys, including one lawyer in an investigation of complex offshore transactions concerning a prominent entertainment company. We convinced the government to decline to bring charges.

Resolved Contentious Tax Case for Canadian Businessman: In our defense of a Canadian businessman in a nine-year investigation, we met with the Tax Division in Washington, D.C. and the United States Attorney in Los Angeles to achieve an extremely favorable settlement.

Represented Online and Sports Betting Companies in Tax Charges: We have defended several internet gambling companies, including sports betting entities, in prosecutions for tax evasion and wire fraud. The firm has achieved favorable settlements for numerous clients including immunity protection.

Counseled on Illegal Hiring, Social Security Act Violations Trial: We were the architects of the trial strategy for a grocery store executive accused of violating the Social Security Act in the course of rehiring striking workers at alternative supermarket locations.

Resolved Immigration Visa Fraud Claims for Nonprofit Organization: We defended a nonprofit organization and its religious leader on charges of providing false statements concerning the visa status of its employees. No charges were filed against the entity and charges against the entity’s leader were eventually dismissed.

Defended Janitorial Service in Illegal Worker Claims: The firm represented the owner of a janitorial contracting service for chain restaurants on charges of tax fraud and harboring illegal workers. We achieved a favorable settlement from the government, so favorable that the District Judge expressed his surprise at it.

Achieved Favorable Outcome for Car Dealership in Criminal Charges: We represented a car dealership being investigated for its negotiation tactics. We successfully averted all criminal charges.

Defended Pet Distributor Accused by Federal Government of Customs Fraud: The firm defended a pet distributor investigated for smuggling endangered animals. We averted all criminal charges even after the government insisted that charges would be filed. 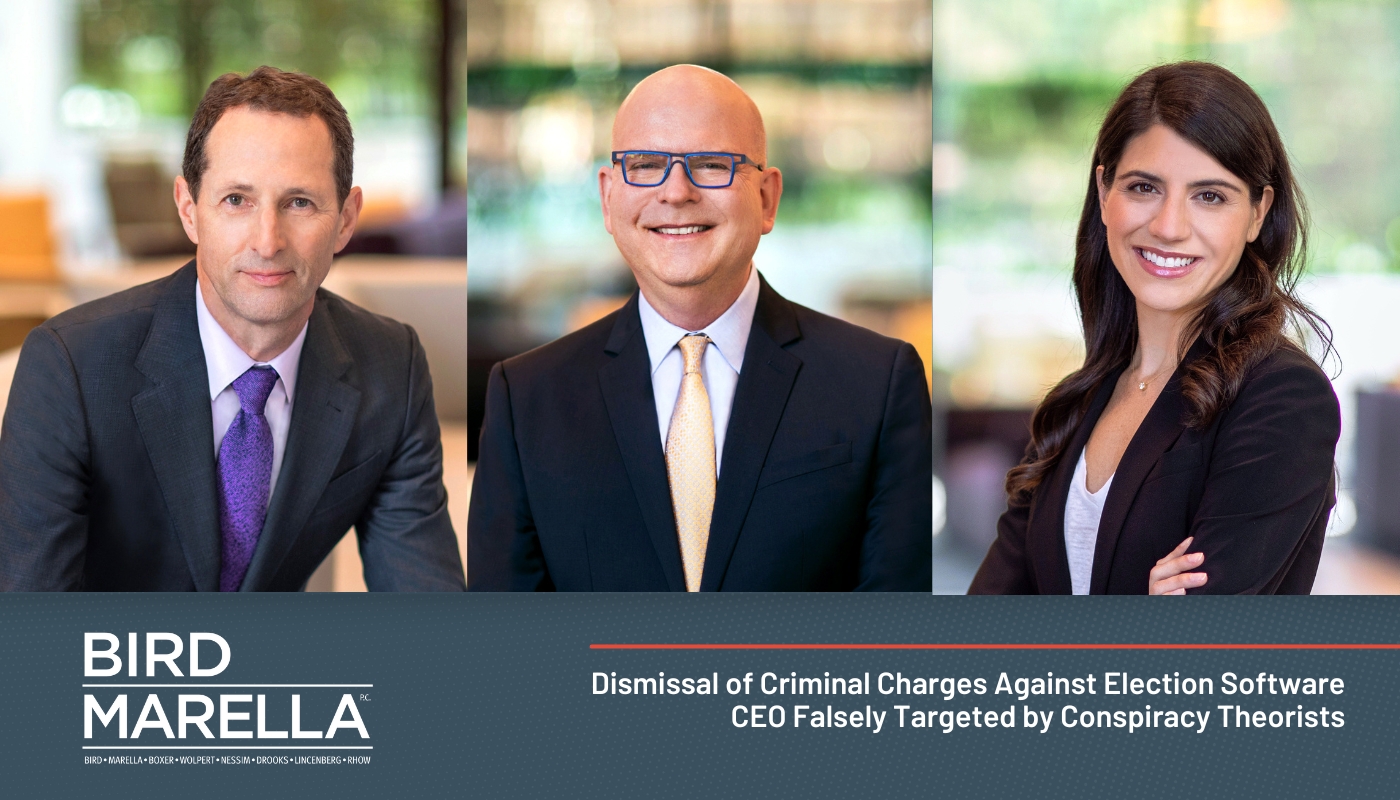 In an abrupt end to a trial expected to last three months, Bird Marella won a mistrial in the highly-publicized Backpage.com federal jury trial. On September 14, 2021, …

In a pre-indictment tax fraud investigation where the client, a tax attorney is a subject and his client is the target of the investigation, Bird Marella attorneys Ron …

Bird Marella principal Ariel Neuman was interviewed by Corporate Crime Reporter regarding the SEC and DOJ’s focus on the EB-5 visa program, including his experience representing an immigration lawyer targeted by …