Complex business litigation is a defining practice of Bird Marella. We have represented clients in federal and state courts and arbitrations in a broad range of litigations that mirror the evolution of global commerce during the past 40 years. Our practice extends across virtually every area of business torts and commercial litigation.

We have particular expertise representing corporate and individual clients in complex controversies involving finance, intellectual property, securities, health care, real estate, entertainment and employment. We are distinctive among litigation boutiques for providing dual civil and white collar criminal counsel, which is of paramount importance for clients facing parallel proceedings. Our growing Pacific Rim practice is also a notable area of firm strength. In addition, the firm acts as plaintiffs’ counsel on a selective basis.

Although the resolution of complex business disputes frequently occurs prior to trial, Bird Marella assumes a trial-ready stance from the outset of litigation. Several of our attorneys are former Assistant United States Attorneys, many served as judicial clerks, and all are trial-tested. We believe our reputation for trial excellence results, in large part, from the close client connection we foster with our clients. The attorneys you talk to are the ones who will try your case.

Prevailed for Company and Officers in Corporate Power Grab Trial: We represented a manufacturer and several of its officers and directors. The court trial involved a shareholder’s challenge to the election of the corporation’s directors and various alleged breaches of fiduciary duty. We obtained defense judgments in the matter.

Serving as CA Counsel in $2.8B Misappropriation Claim Against Bank: We are California counsel for an Orange County financial software company in an action against a foreign bank. The federal court case includes a $2.8 billion demand related to the misappropriation of our client’s software and technology platform for money transfers by a financial institution based in the Middle East.

Co-Counseling in Credit Union Agency’s RMBS Securities Suit: The firm is serving as California co-counsel, in coordination with a Washington, D.C. firm, in the representation of an independent government agency that regulates and charters federal credit unions. Our client’s suit against a global securities and investment banking firm includes more than $490 million in securities law violations. The claims also include alleged misrepresentations of the risk involved in certain residential mortgage-backed securities which led to the failure of the U.S. Central and Western Corporate Federal Credit Unions.

Obtained Summary Judgment, Reduced Exposure for Credit Card Processor: We defended one of the largest merchant-side credit card processors in a claim arising from fraud allegedly perpetrated by one of its merchant customers. After quickly winning a motion to dismiss that substantially reduced the amount in dispute to approximately $6 million, we won a summary judgment motion from the court.

Settled Leasing Company’s Dispute with Finance Company: We obtained a substantial settlement on behalf of our client, one of the nation’s largest equipment leasing companies, in a dispute arising from its acquisition of a business from a large-scale financing entity.

Conservatorship & Estate of Britney Jean Spears, 2011 Westlaw 311102 (Cal. App. 2011): We successfully represented the conservators in an appeal which upheld the probate court’s order restraining a lawyer from acting on behalf of the conservatee, pop star Britney Spears.

Represented Trustee Judge in Will Contest and Appeals: We represented a former presiding judge of the Los Angeles Superior Court Probate Department acting as successor trustee in a decade-long series of disputes starting with a will contest. The will contest went to trial and the court voided a disputed holographic trust amendment. Thereafter, the claimant was disinherited by a “no contest” clause. In addition to the will contest and “no contest,” the dispute involved four separate successful appeals.

Obtained Favorable Ruling for Trustee Heirs: In our representation of the heirs of a successor trustee, the firm worked with an expert forensic accountant to reconstruct ten years of trust accountings. During the trial, we established that our clients did not owe any money to the beneficiaries of the trust.

Resolved Spousal Fiduciary Dispute at Trial: We represented an individual who managed multiple businesses owned jointly with his former spouse, with whom he was involved in a fiduciary dispute. The firm established, at a three-week trial, that no further accountings were necessary and that no monies were owed by our client.

Dismissed Contract Breach Claims for Contractor on Summary Judgment, Upheld on Appeal: We served as lead counsel for a Fortune 100 engineering contractor in a breach of contract, negligence, and fraud action stemming from alleged delays in the construction of a Beverly Hills surgical center. We successfully obtained summary judgment on all claims after the plaintiff turned down a substantial settlement offer. We then handled the appeal before the California Courts of Appeal and obtained an order affirming the summary judgment.

Representing Global Manufacturer in Large-Scale Qui Tam Action: The firm is defending the world’s largest manufacturer of plastic pipe in a national qui tam case involving whistle-blower allegations of alleged violations of industry standards. The action has been brought by a group of over 50 states and government entities.

Reduced Risks in Brokerage Ponzi Scheme Mass Claims: The firm succeeded in forcing class / mass action claims into arbitration, which ultimately resulted in modest settlements or favorable awards, in our representation of a regional brokerage firm. The matter arose out of the sale of limited partnership investments that allegedly were part of Ponzi schemes.

Shut Down High Demand Claim Against Fortune 500 Tech Company: Our client, a Fortune 500 technology company, faced allegations of breach of contract, securities fraud, and an array of additional tort claims and an eight-figure damages claim, as well as punitive damages claims. Our clients prevailed in the seven-week trial and received an award of $1.5 million in attorneys’ fees.

Defended Tech Executive Jailed in China on Business Fraud Claim: The firm represented the chairman of an electronics importing company who was arrested by the Chinese government for claims of financial fraud related to business contracts with a Chinese electronics manufacturer. The arrest received extensive media coverage. We were able to secure the release of the executive and resolve the international business dispute.

Settled $100M Guam Real Estate Dispute for South Korean Company: We defended one of the largest South Korean companies in tort and contract claims related to a $100 million resort development in Guam and claiming damages in excess of $100 million. We achieved a walk-away settlement that was favorable to our client.

Prevailed in Defense of Fraud Claims in Real Estate Partnership Dispute: We represented a group of foreign business people accused of fraud and breach of fiduciary duty in connection with a series of real estate limited partnership investments. After contentious litigation involving more than 100 days of deposition, we prevailed on a motion to disqualify plaintiffs’ counsel. Following substitution of new counsel, we succeeded in diverting the case to arbitration, at which our clients prevailed.

Settled Fraudulent Sales Claims Related to Recalled Food: The firm served as trial counsel for the nation’s largest producer of sun-dried tomato products. The jury trial concerned the fraudulent sale of thousands of gallons of adulterated olive oil, following a recall conducted by the Canadian Food Inspection Agency. We obtained a substantial settlement for the client midway through trial.

Vu v. California Commerce Club, Inc., 58 Cal. App. 4th 229 (1997): We represented a defendant gaming establishment in an appellate victory which ruled that the plaintiff could not recover on his “cheating” claims because any losses were necessarily speculative due to the unpredictable elements of luck and skill inherent in the game of poker.

Resolved Hotel Ownership Dispute: We represented a large motel chain in a dispute regarding ownership and control of the corporation. After filing suit, we resolved the case, which established our client’s undisputed control and ownership of the business.

Brought Tech Copyright Claims to Trial to Achieve Settlement: We represented a small software company in copyright and breach of contract claims against a large software company. After three weeks of a jury trial, the defendant agreed to pay our client a confidential amount just prior to the start of closing arguments. When we polled the jurors, they indicated they would have awarded between $20 and $40 million. Until we brought the case to trial, the defendant has refused to enter in any meaningful settlement negotiations.

Obtained $49M Jury Award in Entertainment Profit Participation Trial: We represented creators of a hit television sitcom in a profit participation / royalties dispute with a major studio. The case settled after the jury awarded $49.5 million in compensatory damages, and found fraud by the studio and punitive damages against the studio. We reached a settlement before the punitive damages phase.

Enforced Trademark Protection Against Corporate Competitor: In our representation of an electrical services corporation, we moved for a preliminary injunction to stop the intentional infringement of our client’s federally registered trademarks by a competitor. Immediately following the hearing on the motion, the defendant capitulated and entered into a stipulated consent decree and judgment forcing it to change its name and permanently enjoining it from referencing any of our client’s marks.

Avoided 2nd Trial in Trade Dress Dispute for Family-Owned Retail Empire: Our client, a major fast-fashion retailer, replaced original trial counsel with our firm after the initial trial, involving cutting-edge trade dress issues as applied to garments, ended with a hung jury. We were able to favorably resolve the dispute with the plaintiff, a menswear designer, just prior to the commencement of a second trial. 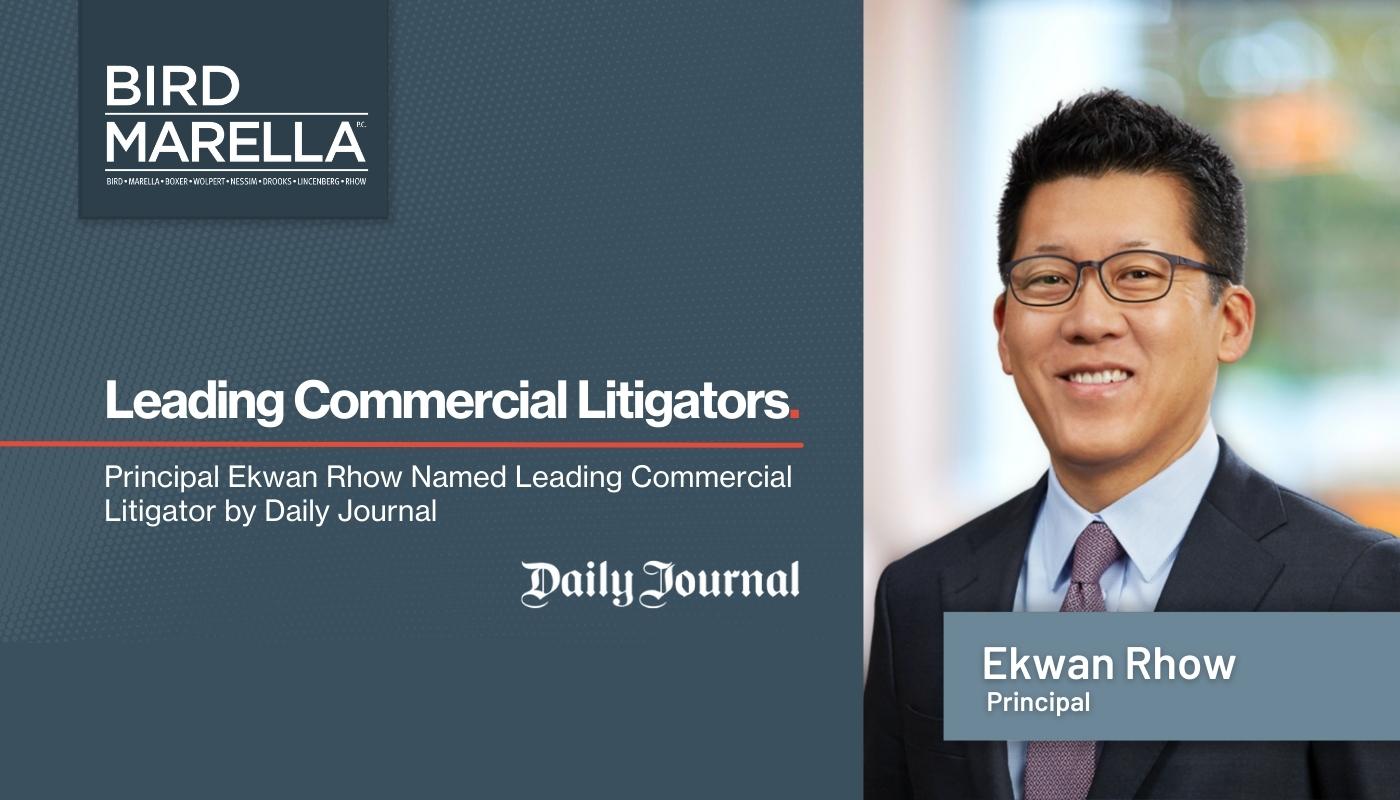 U.S. News – Best Lawyers® once again recognized Bird Marella in its 2023 list of “Best Law Firms.”   The firm is ranked nationally in 5 practice areas and regionally … 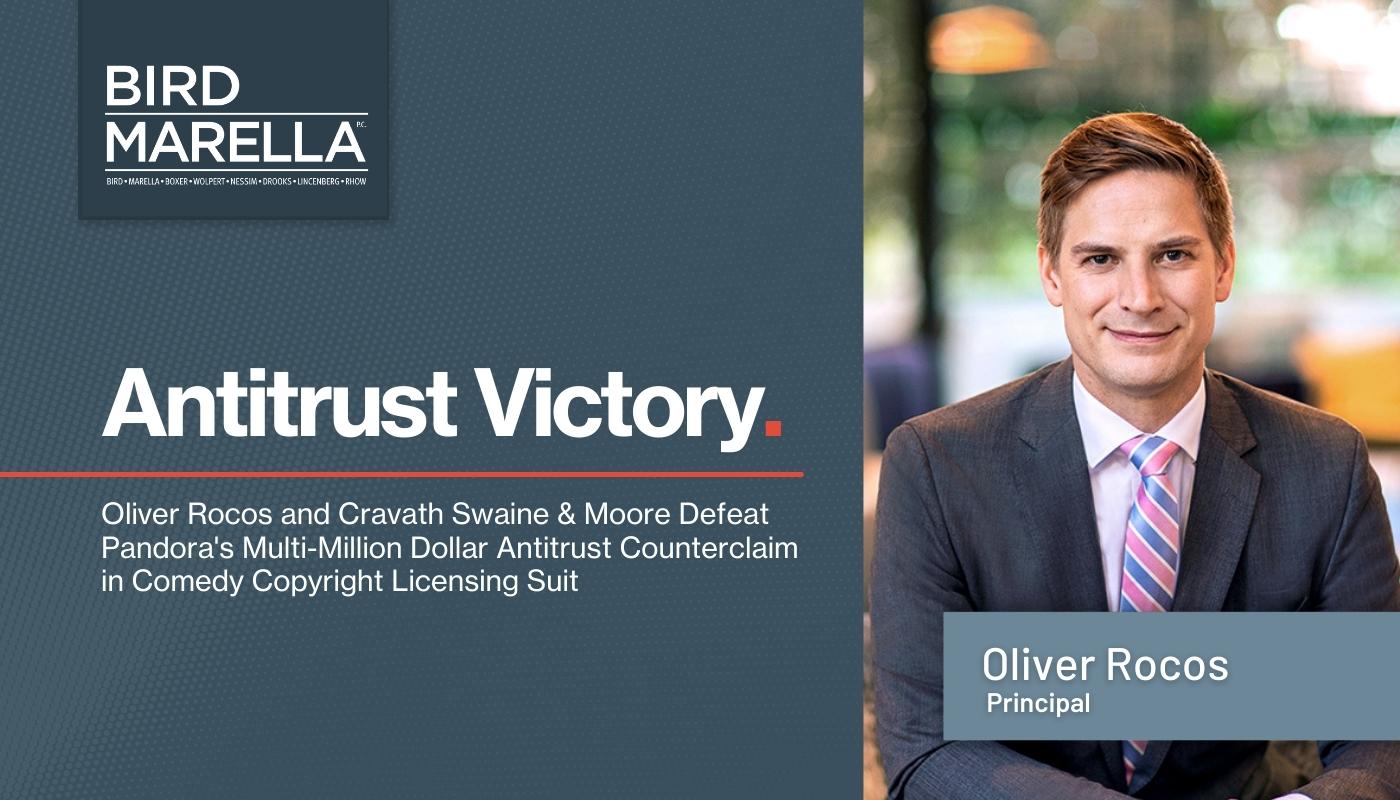 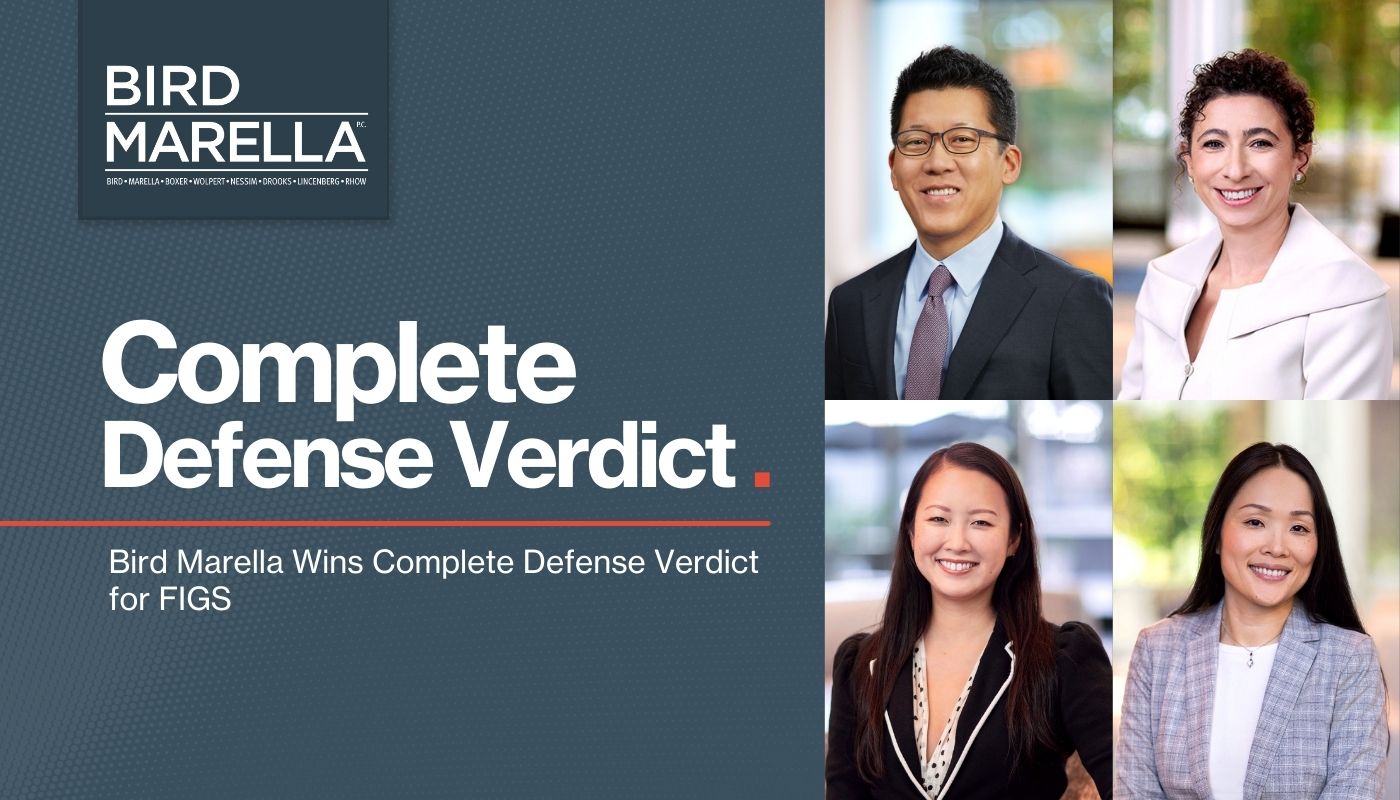 After four years of litigation, a three-week jury trial, and less than one full day of jury deliberations, the Bird Marella trial team, led by lead trial counsel …